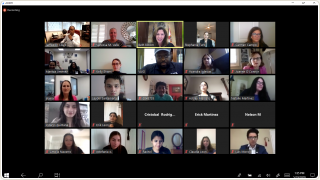 While federal courthouses and schools are closed, lawyers and judges are not slowing down when it comes to teaching students about the judicial system. On May 19, our court and leaders from the South Florida Chapter of the Federal Bar Association brought Law Day into the homes of 53 students and faculty from Hialeah Gardens Senior High School’s Law Academy.

Law Day is observed every year across the nation to celebrate the rule of law in our society and to cultivate a deeper understanding of the legal system and the legal profession. On Feb. 3, 1958, President Dwight D. Eisenhower established Law Day by proclamation.  In 1961, Congress passed a joint resolution designating May 1 as the official date for the observance.

While Law Day, typically, is celebrated in courthouses, this year because of the pandemic, the federal court in the Southern District of Florida used interactive technology to bring live conversations with a judge and volunteer attorneys to the students. The discussion centered on the American Bar Association’s Law Day theme: “Your Vote, Your Voice, Our Democracy: The 19th Amendment at 100,” marking the centennial of the passage of the transformative constitutional amendment that guaranteed women the right to vote.

Students learned about the role of the courts in social change through the life stories of pioneering suffragist Virginia Minor and teen-aged Vietnam War protester Mary Beth Tinker. The students also learned about the rule of law and its application to their everyday lives, particularly during the pandemic.

I was joined in coordinating the event by the president of the Federal Bar Association South Florida Chapter President Alaina Fotiu-Wojtowicz, a partner at Brodsky Fotiu-Wojtowicz; and by the chapter’s civics liaison Stephanie Turk, an associate at Stearns Weaver Miller Weissler Alhadeff & Sitterson.

The opportunity to engage with students and to discuss our nation’s history, the suffragist movement, and the achievement of the women’s right to vote was a tremendous experience. The students were enthusiastic, asked great questions and wanted to learn. Who could ask for more?

Ms. Fotiu-Wojtowicz agreed that the students’ knowledge, curiosity, and obvious commitment to civic engagement at such a young age was inspirational. Ms. Turk said she was beyond impressed with the caliber of the students’ questions and comments, their overall engagement, their commitment to being active members of society, and their excitement about exercising their right to vote when eligible.

Dr. Derrick Johnson, a law instructor at Hialeah Gardens Senior High School, also was impressed with the program, saying that it provided his students with an interactive opportunity that enriched their understanding of the nation's legal system, voting process and history. He expressed interest in participating again.

In addition to the robust discussion, students were asked questions about the rule of law, including the following:

1. The rule of law is a principle under which all persons, institutions, and entities are accountable to laws that are:

e. All of the above

2. True or false: Our nation’s fundamental law is the golden rule.

4. In our Constitution, how many branches of government were created?

6. True or false: The Constitution protects the impartiality of federal judges when they have to make unpopular decisions in order to follow the rule of law.

7. Are judges able to impose their personal beliefs on others when deciding issues before them?

8. True or false: Laws reflect the will of the people and the people consent to abide by the laws.

9. True or false: Laws are made in a private process and are not available to the public.